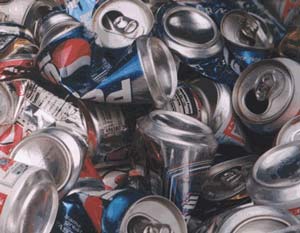 Aluminum is an element, one of the basic building blocks of all matter. It accounts for about 8% of the matter in Earth’s crust, third in abundance behind the elements oxygen (47%) and silicon (28%).

Though aluminum is the most abundant metallic element in Earth’s crust, it is rarely found in its pure form. Aluminum atoms commonly bond with other atoms to form a variety of compounds called minerals. Aluminum is a key element in some of the most beautiful gemstones, such as sapphire, ruby, topaz, turquoise and jade.

Not all minerals containing aluminum are gemstones. Bauxite, an unspectacular looking rock rich in aluminum oxides, is valued for its aluminum content, not its beauty. First discovered in Les Baux, France, in 1821, bauxite is commonly found throughout southern Europe, Australia, Brazil, the Caribbean Islands and central Africa. Bauxite reserves are generally found near Earth’s surface making mining relatively simple.
Once removed from the earth, bauxite is transported to an aluminum plant where the alumina is separated from other minerals. This is accomplished through four main steps:

The dry alumina is then transported to an alumina smelter. There, the alumina is separated into its component elements, aluminum and oxygen, by the process of electrolysis. This process requires a great deal of energy.

The alumina is poured into pots and dissolved in a solution of cyrolite and aluminum fluoride. The aluminum ions in the solution have a positive charge.

Carbon electrodes are used to run a current through the solution. The anode (positively charged) is immersed in the solution from above. A carbon lining on the bottom of the "pots" serves as the cathode (negatively charged).

An electric current is passed through the solution to attract the oxygen ions to the anode where they bond with the carbon to form carbon dioxide. The aluminum ions are attracted to the cathode lining where they pick up electrons to form aluminum metal. High temperatures keep the aluminum in a molten state. A total of two pounds of alumina and 8 kilowatt hours of electricity are required to form one pound of aluminum.

The molten aluminum is then siphoned out of the pots and poured into molds to make large bars called ingots. The ingots may weigh up to 16 tons.

To make aluminum cans, the ingots are transported to a can factory where they are rolled out into thin sheets. The sheets are cut into discs from which the base and walls of the can are extruded. The top and pull ring are formed separately.

The cans and lids are then sent to the beverage plant where they are filled and sealed. Some machines operate at a rate of over 3 million cans per day! The finished product is then transported for sale.

The aluminum ring top beverage can was first introduced in 1961. It has several advantages over tin-coated steel cans. Aluminum cans are lighter, quicker to chill and easier to open than their steel counterparts. Today, most carbonated beverage cans are made of aluminum.