In summer 2016, the City of Amarillo’s Public Health and Environmental Health departments teamed up to launch a public education campaign called Mission Mosquito.

Mosquitoes carry a number of diseases including West Nile, Zika, Dengue, and Chickungunya, with the most common being West Nile. 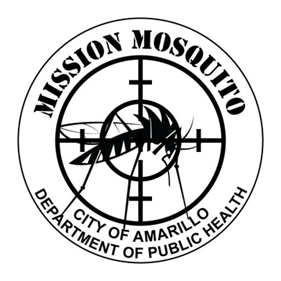 The goal of Mission Mosquito was to prevent mosquito bites and reduce mosquito breeding areas. We wanted to introduce simple prevention steps, reduce the community's risk for all diseases related to mosquitoes and give out information on one of the newest mosquito-borne diseases, Zika.

As part of Mission Mosquito, kits containing information about Zika and West Nile, a checklist for individuals to reduce mosquito breeding areas around their home, mosquito repellant, and other helpful information was made available to the public beginning on July 13, 2016.

There was city wide involvement as city employees wore Mission Mosquito t-shirts on Fridays to remind the public about the 4 D's:

Some city vehicles also had magnets with the logo for Mission Mosquito, to help spread the word.