Join us as we celebrate the history of North Amarillo in art and story. Artists are invited to choose from one of our Historic Locations and create art to express the historical significance of the site. A listing of these sites may be found below. There will also be several awards and prizes for the top artists in an adult artist and student artist category presented by Amarillo National Bank.

Questions? Send us an email at art@amarillo.gov. 29 having walked all the way here from Waco. Encouraged by Bones Hooks and Dr. M.P. Hines, he attended the School of Mortuary Science in Fort Worth, graduating in 1934 alongside the son of Amarillo funeral director E.M. Blackburn. (At the time, mortuary science was one of the few integrated career fields.) Two years later, Austin bought used equipment from the Blackburn-Shaw Funeral Home and opened Austin Funeral Home in the basement of the old Mayflower Hotel. Several years later, Austin moved his business to 1416 N. Hughes, where he served North Heights residents until 1991. Eventually, Austin sold the business to James Mims, who renamed the business Golden Gate Mortuary. A lifelong community leader, Clifford Austin in 1992. 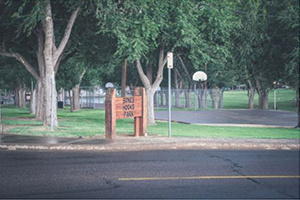 Born in 1867 to former slaves, Mathew “Bones” Hooks moved to the Texas Panhandle as a cowboy famous for his ability to break wild horses. He was widely known as one of the first black cowboys to work alongside white ranchhands. Later, after moving to Amarillo, he became a porter for the Santa Fe Railroad. In the 1920s, having gained prominence within both the city’s black and white communities, worked alongside Lee Bivins and developer A.P. McSwain to create the North Heights addition—an exclusive community for Amarillo’s African American population. Hooks retired in 1930 and was long considered the “unofficial mayor” of North Heights. He poured his time and energy into civic efforts, establishing the Dogie Club, an organization for underprivileged black youths. Bones Hooks was the first black person to serve on a Potter County Grand Jury. He died in 1951. 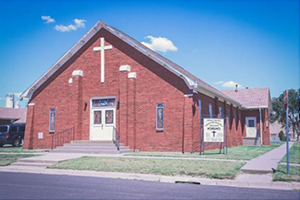 The earliest churches for Amarillo’s black residents met in homes. Carter Chapel first organized in 1907 as “The People’s Church” and erected its first building in 1918 in what was then known as “The Flats.” Amarillo’s black population lived in this area until Bones Hooks began developing the North Heights area. For years, Carter Chapel and Mount Zion Baptist Church were considered the “heart and soul” of the African American community. Eventually the church was renamed Carter Chapel Colored Methodist Episcopal Church. The original church building was renovated in 1956. In 1964, its name changed to the Carter Chapel Christian Methodist Episcopal Church. Many community leaders, including Dr. J.O. Wyatt and Ruby Lewis, attended Carter Chapel over the years. 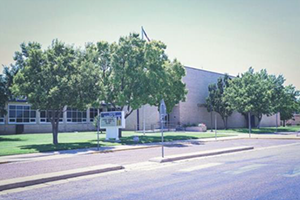 Named after prominent inventor George Washington Carver, this school opened in 1958 to serve the North Heights community. The proud Carver Dragons student body was more than 80 percent African-American. But after the passage of the Civil Rights Act in 1964, Amarillo began taking steps to integrate its public schools. It phased out the high school grades after 1966, with students enrolling in other Amarillo schools. Carver Junior High remained until 1972, when a federal court order demanded an end to segregation, and the school was closed by Amarillo ISD. Today, the building is home to Carver Academy Elementary, a magnet school, and still serves a large number of North Heights students. NOTE TO ARTISTS: You may not work on school property while school is in session. Plan accordingly. 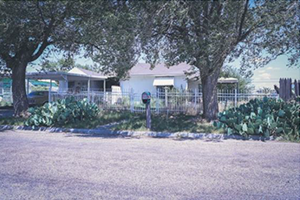 Born in 1900 at Mount Pleasant, Texas, Mary Lou Harris Hazelrigg moved to Amarillo in 1940 with her husband, Alexander. The two worked as janitors for the City of Amarillo until retiring in 1960. In 1965, the couple realized that many underprivileged children in the North Heights didn’t receive Christmas gifts, so they opened their home for a Christmas party. A dozen children attended the first year. By 1984, the Hazelrigg
Christmas Party was drawing hundreds of kids and community donations and moved to the North Heights School. Mary Hazelrigg was named the Amarillo Globe-News Woman of the Year in 1982, the first African-American to earn that honor. She died in 1990. The park across from her home, Mary Hazelrigg Park, resulted from her efforts to bring a city park to her neighborhood. 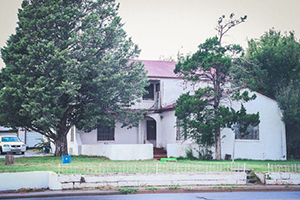 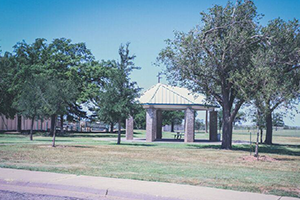 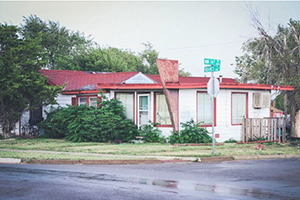 Born in Yoakum, Texas, Nelson Huff and his wife, Bertha, moved to Amarillo in 1935 from Pampa. In 1951, the couple opened Huff’s Drug, which they operated until his death in 1997. For years the only pharmacy serving residents of the North Heights, Huff’s Drugs served as a gathering place for members of the community. Nelson and Bertha were lifelong members of Mount Zion Missionary Baptist Church. 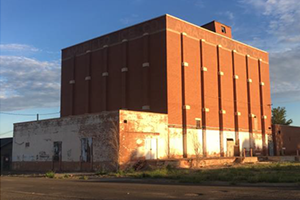 Formerly known as the Amarillo Ice Distribution Company, this five-story building was the skyscraper in the neighborhood. Employing many from the flats and North Heights, ice was frozen on site, cut into blocks and distributed for placement in the top of “ice boxes.” Picture a scene from the 1920s in which the icemen loaded both Model A Fords and horse-drawn wagons with 25-50 lb. blocks of ice from the dock for delivery.

Now the home of Another Chance House, which offers low-income housing for men seeking a path out of homelessness, this structure once served as the Knighton Hotel. Promoted in the Negro Motorist Green Book—an annual guidebook for African-American travelers—the Knighton was one of the few local hotels friendly to Amarillo’s black community. Duke Ellington and His Orchestra, Tina Turner and James Brown are a short list of significant people who stayed at the Knighton. 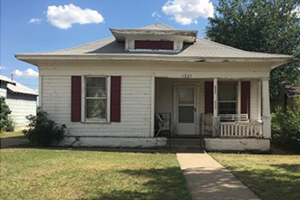 Known across the city as “Lady Cool Breeze,” Ruby Lewis was the first woman and first African-American radio personality in the Texas Panhandle, becoming one of the most prominent area radio broadcasters in the process. She debuted playing jazz and R&B music on KAMQ-AM in 1954. Lewis worked until retiring in 1988 and was known for her smooth, mellow voice. A competitive athlete, she qualified in 1986 for the race-walking competition at the national Senior Olympics in San Francisco. In 2004, Lewis served as one of three grand marshals at the Tri-State Fair Parade. She was a member of Carter Chapel CME for more than six decades before her death in 2014. 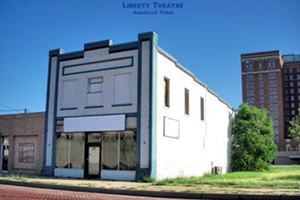 Built in 1921 and located in the heart of downtown Amarillo, the Liberty Theater spent years as the only integrated theater in the city. Built by two Jewish residents, it allowed black and Hispanic residents to watch films from its balcony. The Liberty closed in 1953 and has long been abandoned. It is currently the subject of multiple discussions about its renovation, related to the redevelopment of the surrounding block. 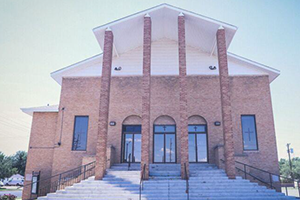 Organized in 1910, Mount Zion Missionary Baptist Church was a product of the hard work of men like Jerry Calloway, the first black man in Amarillo, and Matthew “Bones” Hooks. Rev. Miles Jenkins was the first pastor. The church acquired property and built its first building in 1916. Notably, members of the First Baptist Church in Amarillo assisted with the site selection and building process. The “approval” and involvement of white citizens helped prevent the building from being a target of racism. An earlier attempt to construct a building had resulted in the structure being burned. 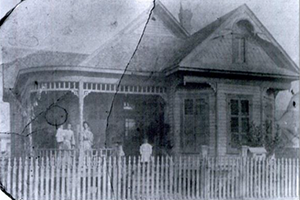 Educator and pastor Silas C. “S.C.” Patten was a prominent member of the community and one of the first North Heights residents to own a car. He founded the church that later became the Johnson Chapel African Methodist Episcopal Church. In 1925, Patten served as principal of the Frederick Douglass School—the first Amarillo school for African-American students—and in 1928, donated his family home at 18th and Hughes to become the Patten High School, the first high school for African American students in the Panhandle. He served as its principal until 1947. The parking lot for North Heights Church of Christ exists where this four-room school building once stood. 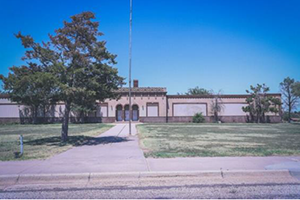 Now a church building, Summit Elementary was once one of two AISD elementary schools serving the North Heights Community. It was built in 1927 and designed by prominent local architect Guy Carlander. Summit was closed in 1972 due to the district’s desegregation plan, and its students began to be bused to other elementary schools throughout the city. Today, the property is home to Summit Baptist Church. Trespassing violations are common here due to urban legends about the building being haunted. 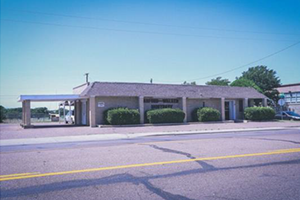 In 1937, Charles E. Warford moved to Amarillo with his single mother, Nellie Parker. He joined the Navy during World War II, serving on a destroyer that accompanied the D-Day invasion of France in 1944 and in the Pacific at Iwo Jima and Okinawa. After the war, he attended Landig Mortuary School in Houston, then worked in Dallas and Abilene before returning to Amarillo. In 1962, he founded Warford Mortuary on North Hughes. It is the oldest, continuously operated African-American business in the city. In 2002, the Amarillo chapter of the NAACP honored Warford with its Lifetime Achievement Award. Charles Warford passed away in 2017.

When Dr. James Odis Wyatt arrived in Amarillo in the late 1930s, he was denied privileges at St. Anthony’s and Northwest Texas hospitals. In response, he opened a clinic in the North Heights to serve the African-American community as a primary care physician. He owned the entire block and provided living quarters for his nursing staff. Ten years after he opened the hospital, he was finally granted privileges throughout Amarillo’s medical community. In 1955, J.O. Wyatt was the first African-American to seek public office in Amarillo after running for a seat on the school board. A few days after he announced his candidacy, a cross burned on his lawn. He died in 1958. The property is now home to the Amarillo United Citizen’s Forum, a community organization, and the remaining building original to the property was his home. The 45,000-foot J.O. Wyatt Sr. Community Health Center at 1411 E. Amarillo Boulevard is named for him.